The main drivers of the current extreme price environment

At the time of writing, the European gas market is in a turbulent, panic-like mood. European day-ahead gas prices are at record highs. On CEEGEX on 7 October, the end-of-day reference price was EUR 120.60/MWh and the best bid was EUR 150/MWh. Although prices have been falling day by day since then, we are still far from the normal market environment we are used to. In the following, we look at how the gas market got here. 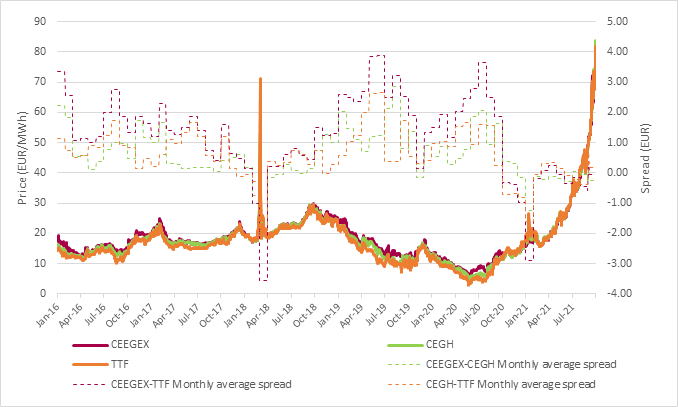 In recent years, several spikes have had major impacts on gas prices in Europe, but in most cases this has not been sustained and prices have returned to their usual levels of around EUR 20/MWh. If we look at the price movements over the last 5 years, the outlier in the positive direction was the Beast from the East event and in the negative direction the economic downturn related to the COVID-19 pandemic.

However, for 2021, this seasonality is not present at all. The year itself started with a small spike when a sudden surge in energy demand in Asia caused a visible price increase. This was followed by a shorter correction, while the prolonged cold weather in April meant that the summer gas season did not bring a fall in gas prices. In addition, the impact on market sentiment of the news of the completion of Nord Stream 2 (introduction and then withdrawal of US sanctions) has increased since the beginning of the year. This has been compounded by the fact that Gazprom has not book extra interruptible capacity on the Ukrainian route above the minimum contracted volumes since spring.

Chart 2: Russian capacity bookings in Ukraine according to GTSO

According to ENTSOG and the Ukrainian GTSO, Gazprom also did not book extra capacity in the Ukrainian direction during the periods when Yamal and Nord Stream 1 were operating at reduced capacity due to maintenance.

Chart 3: The gas flows of the main Russian pipelines 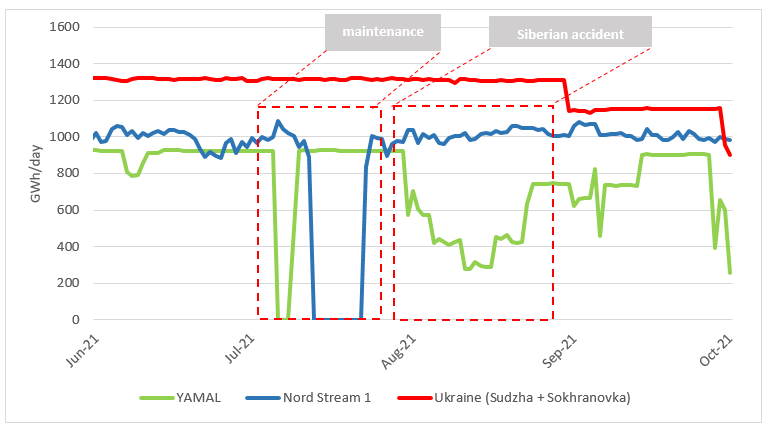 This was followed by an accident in August when a fire at a processing plant in a Siberian field led to a reduction in the gas flows of the Yamal pipeline, leaving EU countries with a supply shortage. Due to the prolonged cold winter, storage facilities have started to be filled from multi-year minimum levels. However, due to the high price environment caused by the supply shortage, the process was essentially slow and EU storage levels did not reach the 2020 level by the start of the new gas year. 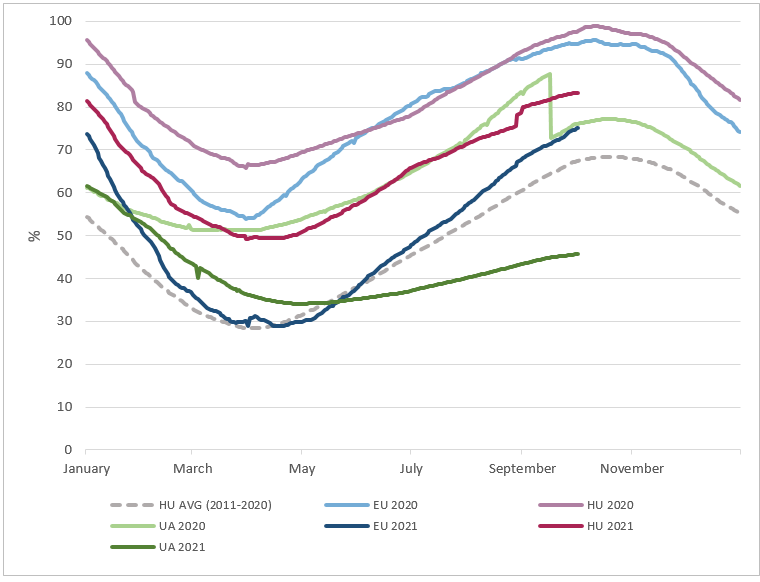 EUA prices have also started to rise in line with gas prices and have broken several records this year. The fact that the price of natural gas has been the main driver of the EUA price increase during this period is illustrated by the case of Gascade, a German TSO, which accidentally published false flow data on its website in August, one month before the completion of the Nord Stream 2 pipeline. Although the news was not true, the markets reacted significantly and we immediately saw a drop of around 10%  in the price of natural gas, followed by the EUA pricedrop. Once it became clear that the data was wrong, the price soon started to rise again.

Chart 5: The EUA Dec-21 and the gas DA prices in August and September 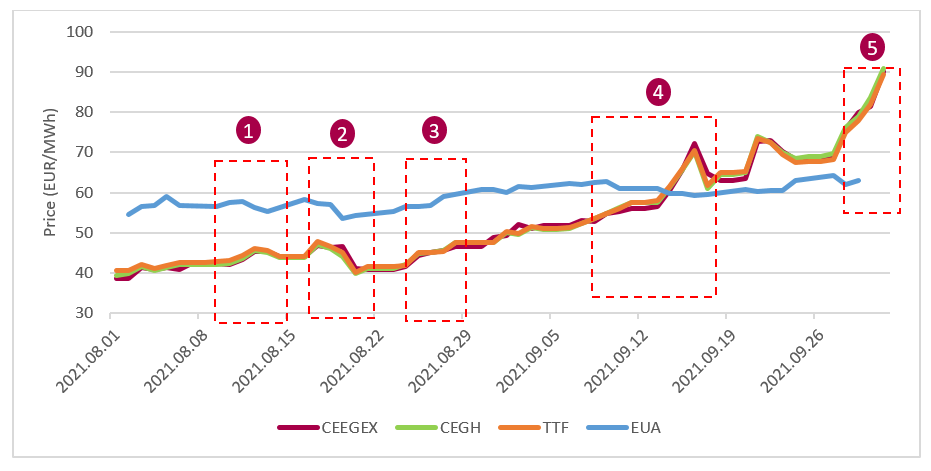 The EUA and the price of natural gas have been clearly eclipsed by the end of the summer by news of Russian supplies. The price of natural gas was also very much influenced by the question of when the Nord Stream 2 pipeline would be commissioned and when actual physical deliveries would start. However, when the German court rejected Nord Stream 2 AG's complain, meaning that the pipeline is still not compliant with EU regulations and will not be exempted from them, the price of natural gas started to rise again. This took on notable proportions in September, when Russian Foreign Minister Sergey Lavrov said on 15 September that because the Nord Stream 2 approval process would take around four months, the expected commissioning of the pipeline was scheduled for 2022.  In the following days , the price of natural gas reached the EUR 70 level. This was followed by 28 September, when the gas flows on Yamal pipeline halved, and then fell further on 2 October. These events all contributed to the accelerating rise in European gas prices in 2021.

Chart 6: Main gas flows from Russia (without Ukraine) and the DA prices 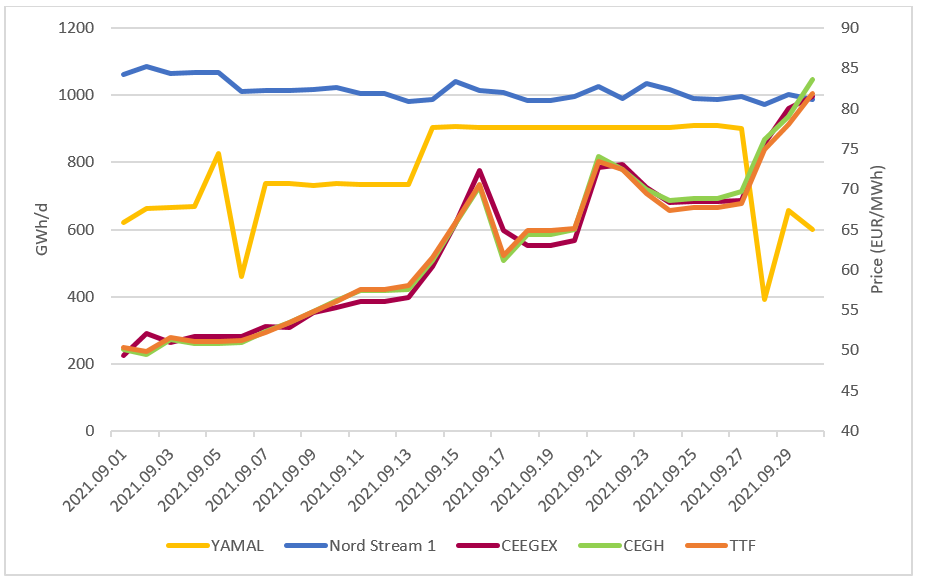 The last historic price increase was caused by the Beast from the East cold spell, when the price of natural gas on the TTF crossed the EUR 70 level for a single day. This was due to much colder than usual weather in Western European countries, the already lower production levels at the Groningen gas fields, lower than usual storage levels and the Stockholm arbitration court ruling against Gazprom, which led the Russian export monopoly to consider terminating its transit contract with Ukraine. The high demand caused by the weather and the news of a potential drop in imports to Russia, coupled with low storage levels, pushed gas prices to record highs. In addition to this, if we look at the spreads between the three hubs, we can see that the rise has affected different countries differently, so this was more of a regional shock. As in 2018, European storage levels are currently lower than usual, a cold winter is also forecasted, and there is also a major conflict at the heart the routes for Russian gas in order to export and bypass Ukraine (Nord Stream 2 licensing, TurkStream and the associated Balkan route commissioning). However, there is also another factor.

An increase in LNG deliveries is expected to offset the Russian shortage. However, at the moment, as shown on  Chart 7, the spread between the Asian JKM and the Dutch TTF makes the Asian market more attractive for LNG supplies, and this spread is widening as winter approaches, sometimes reaching as high as EUR 20. This is due to the rising demand for energy in Asia following the COVID-19 crisis and the increasing utilisation of gas-fired power plants.

Europe's current dependence on natural gas, and in particular on gas imported from Russia, is illustrated on Chart 8. The natural gas, which is still the second largest energy source in the EU (22% of its energy mix in 2019), accounts for a significant share of the EU's energy consumption. The largest share of imports of this energy carrier (40%) comes from Russia, so the questions regarding Russian imports are far from trivial in terms of the volumes destined for Europe, and hence the price of European gas.

The Balkan section of the TurkStream route to Hungary started operating on 1 October, but Russia is not expected to extend its gas supply contract with Ukraine until 2024. It is now safe to conclude that Russia plans to supply its European customers via Nord Stream 1-2 and Yamal pipelines and the Balkan route in the coming years, and to eliminate the Ukrainian route in the long term. In principle, Hungary will not lose its position as a transit country, but apart from the LNG terminal in Krk, the region will continue to depend mainly on imports from Russia. Poland is not expected to extend its long-term contract with Russia, which expires in 2022. In order to reduce its dependence on Russian imports, Poland is just building the Baltic Pipe, new interconnector to Slovakia and Lithuania will be developed and a new floating LNG terminal will be built in addition to the expansion of the existing one. In Russia, the possibility of allowing companies other than Gazprom to transport through the Nord Stream 2 pipeline to comply with EU regulations is currently being explored, but the process of amending the legislation is expected to take a long time. The price of natural gas on European markets has briefly crossed the historic 100 EUR/MWh mark and it is not clear at this stage when we will return to the price levels we were used to until Nord Stream 2 comes on stream and imports from Russia return to normal levels. At the same time, forecasts of a colder than average winter at present could further stimulate expectations of a high price environment. 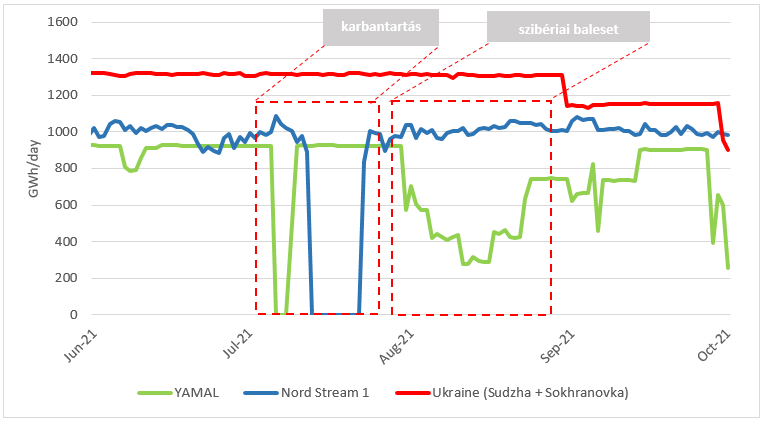 Disclaimer: The current article is an opinion, which do not count as financial advice and do not necessarily match with the official position of CEEGEX. ||| E cikk egy vélemény, mely nem minősül befektetési tanácsnak és nem feltétlen egyezik a CEEGEX hivatalos álláspontjával.